“Photography has always been very popular in China,” says Liu Heung Shing, the founder and chief executive of the Shanghai Center of Photography (SCoP), which opened on 22 May. The Hong Kong-born, US-trained photojournalist says that in the past decade China has inched away from a duality of entrenched traditions of photographically emulating Chinese ink landscapes or photography as political propaganda. The old guard “is fading out, and the young see it as self-expression, as a document, as an art form”, he says.

Welcome to the neighbourhood

The centre is part of the West Bund Cultural Corridor, which aspires to become China’s museum mile and is home to the Yuz and Long museums; a branch of ShanghArt Gallery is also due to open. The inaugural show, Photography from the 20th Century (until 22 July), features images from the collection of Atlanta- and Shanghai-based Jin Hongwei, a former photo editor at Shanghai Pictorial and a stakeholder in the photo agency Sipa Press.

The 500 sq. m building was designed by the US architectural firm Johnston Marklee and built in 2013 for the inaugural West Bund Architecture and Contemporary Art Biennale. “After 2014 they didn’t know what to do with it,” Liu says. Xuhui District mayor Sun Jiwei offered it to him as a studio; instead, he converted it into a photography exhibition space. The small space allows for things like proper climate control, absent in many larger institutions.

The centre will divide its exhibitions between non- and for-profit shows, supplemented by book and print sales. The commercial shows “must have an intrinsic value to the public”, Catching says. “What happens when museums don’t have enough money is that they end up taking mediocre shows that are funded by some government body, gallery or collector or, something which is very common in China, actually renting space out to interested parties. We would rather have people know that we are a hybrid space than have to make those kinds of compromises.”

SCoP represents the convergence of Shanghai’s museum boom with the city’s growing public passion for photography. Though photography has long been a pillar of Shanghai’s contemporary art, the launch of the art fair Photo Shanghai in 2014 raised its prominence. Catching says: “There were lines around the block to see the fair and besides the few galleries in Shanghai—M97, Beaugeste and Ofoto—there are few places wh ere one can go to see and learn about photography.”

While local galleries and art museums showcase more Chinese contemporary photography, SCoP plans to show about 70% international work, from a historical and stylistic range, and is working on its education and outreach programmes with the Three Shadows Photography Art Centre in Beijing.

Previously at the OV Gallery in Shanghai, Catching is also a curator at the city’s M21 Museum and editor of the online Chinese art magazine Randian. Her contemporary art background in Shanghai balances with that of the globetrotting photojournalist Liu, who trained at Life with the Albanian-American photographer Gjon Mili, won a Pulitzer Prize in 1992, and has lived in New Delhi, Seoul and Moscow. He was then based in Beijing from 1997 until 2014, when he moved to Shanghai. 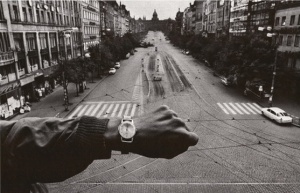 Photography from the 20th Century: The Private Collection of Jin Hongwei