The Abode of Illusions: The Garden of Zhang Daqian

Yuz Museum is honored to present the exhibition “The Abode of Illusions: The Garden of Zhang Daqian” from November 11, 2020 to April 11, 2021, featuring a group of photographs by Hu Chongxian with inscriptions by Zhang Daqian. This is the first time the artworks have been showcased in China since they left nearly 40 years ago.

Zhang Daqian, master of traditional Chinese painting, returned and settled down in Taiwan in his twilight years. He designed and built his last garden in the verdant Waishuangxi in Shilin District, Taipei, and named it Moye Jingshe, translated as Māyā’s Abode or the Abode of Illusions. The word moye originates from Buddhist allusion and is the Chinese transliteration of the Sanskrit term māyā which means illusion. Jingshe (abode) generally refers to the place where monks live and conduct meditation and practice. The Abode of Illusions is comprehensive with scenic landscaping elaborately designed by Zhang. The composition of tiny details from every tree and bush craft the epitome of his enthusiasm for nature and the pursuit of aesthetic perfection. 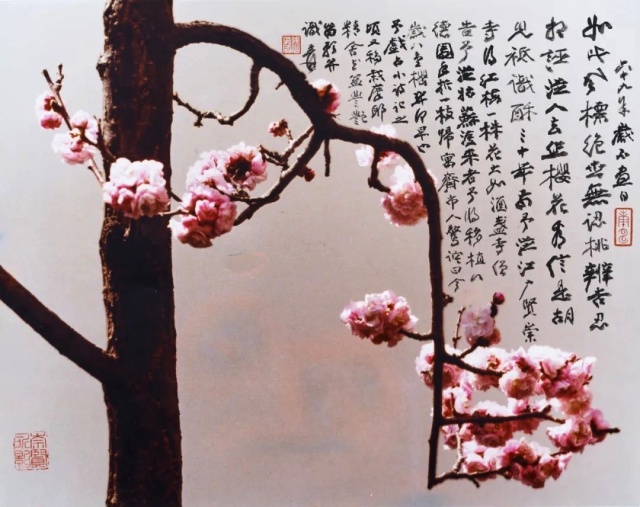 Zhang Daqian loved lotus and plum blossoms all of his life and grew rare and precious plants in every corner in the Abode of Illusions. Almost every year from the completion of the garden until 1983, he invited his friend and photographer Hu Chongxian to take photographs in the garden. Regarded in his lifetime as one of the most talented among his generation of twentieth century modern Chinese painters, Zhang was quick to recognize photography’s potential as an expressive medium as well as the great influence of the camera on modern art and communication. Hu Chongxian’s portrait photography made up the main focus of his career, yet in his fine art photography he captured alluring scenery with his camera rather than paint brushes and sought to evoke the feeling of truth, goodness and beauty found in the artistic conception of Chinese painting. His work was welcomed by many artists and literati, and highly appreciated and affirmed by Zhang Daqian. Hu’s compositions refer to the tradition of ink painting. To capture the natural “gesture” of the plum blossoms and lotus, he eliminated all distracting elements: he inserted blank backdrops behind each of his subjects, from groups of branches to single blooms, an echo of the white paper and silk that made up the background of so many of Zhang’s flower paintings, and waited for the optimum wind and weather to bring out the mood that would best express the essence of the blossoms. After developing and enlarging the film, Zhang Daqian inscribed each photograph with running cursive calligraphy, and to make the photography more picturesque, the two artists signed and stamped each one with the seals typically used in Chinese ink painting.

Most of the plum blossoms under Hu Chongxian’s lens were shot upwards to illustrate distinct beauty of plum blossoms: gnarled, slanting, and sparse. Borrowing compliments from the Song poet Yang Dongshan’s essay “On the Plum Blossom (Mei-hua-shuo),” Zhang inscribed, “To paint the form of a plum blossom is but to paint its portrait; to convey its personality is to convey its spirit” to praise Hu’s images for not only depicting the shape of plum blossoms, but more importantly, for capturing its inner spirit: “He should be considered a great master in our time.” 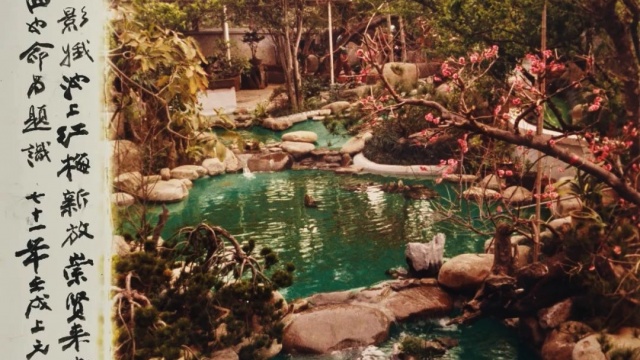 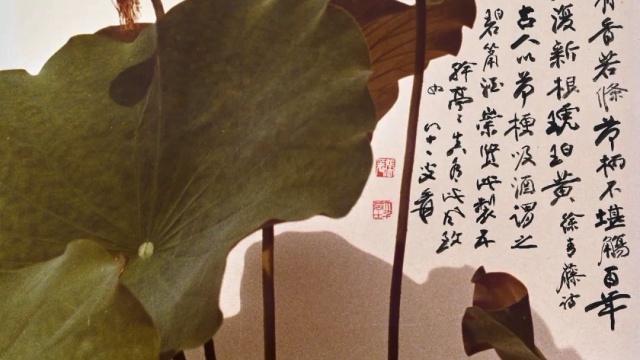 When summer came, cylinders of pink and white lotus flowers were in full bloom, which Hu captured with his poetic photographic creations. For lotus photography, Hu focused on the overall composition of lotus leaves, stems and flowers, rather than a single blossom. In the image Jade Green Straws, the stems and leaves stand erectly and are brightly colored, with distinct shades and clear lines. The strength of the stems and leaves emphasizes the delicate flowers. Zhang related the uprightness of the stalks to the anecdote that in ancient times lotus stalks were used to draw forth wine. He quoted the famous Ming dynasty painter and literati Xu Wei’s poem to express the elegance and delight of this work. Zhang drew references and poems from the history of Chinese literature to serve as his inscriptions and praised Hu many times, saying “Marvelously photographed by Chongxian.” The compliment expresses Zhang’s respect and admiration for Hu’s practice.

The plum blossom and lotus photographs Hu shot at the Abode of Illusions marked his first venture into color photography and Zhang added inscriptions in response to every single one. The two artists were of one mind and connected through a shared aesthetic conception of Chinese literati painting that emphasized poetry, calligraphy and painting and that took shape through a new medium. The breathtaking works that were a result of this shared conception by the prodigious artist and prominent photographer were exhibited many times with the publication of portfolios and catalogues from 1978 and 1982 at the National Museum of History in Taipei. Most of the works exhibited entered into a private collection in the United States and were on showcase in 1983 at the Pacific Asia Museum, Pasadena, California under the title “The Abode of Illusions–The Garden of Chang Ta-Ch’ien.” The Pacific Asia Museum also published the catalogue for the exhibition. Dr. Richard E. Strassberg, then Adjunct Curator of Chinese Art, Pacific Asia Museum and Associate Professor of Chinese, University of California, Los Angeles, translated Zhang Daqian’s inscriptions, signatures, and seals into English in addition to providing a translator’s introduction, which then became an important research resource for this group of works. At the beginning of 2019, Yuz Foundation acquired the nearly seventy immaculately-preserved original works directly from the family of the original collector.

As a collaboration between the photographer and the calligrapher, these rare prints of the Abode of Illusions simultaneously serve as documentation of Zhang’s garden and the ways in which Hu Chongxian’s artistic approach aroused Zhang’s reflection and response. These artworks are also windows into the painter’s inner self in his later years, expressed in Zhang Daqian’s classical Chinese inscriptions, replete with references to the rich history of Chinese poetry and painting. They offer forth photography as a new visual language in traditional Chinese expression, connecting its development to a continuation of Chinese tradition in the context of modern culture. Given increasingly accelerated contemporary society, this group of artworks flourishes again, standing aloof from the world and leading us to look back and consider the spiritual dreamland that traditional Chinese literati yearned for. Artists observe life, create based on natural phenomena, and empathize with nature. May their comprehension of daily life, concern for others, and interpretation of beauty evoke new inspiration in the present. 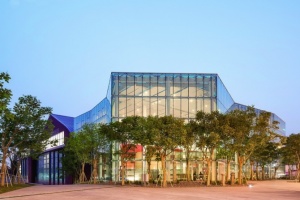 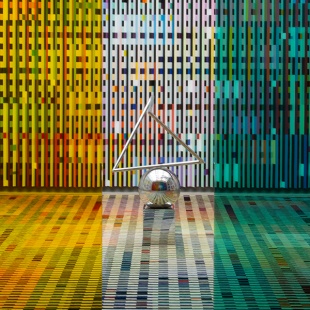 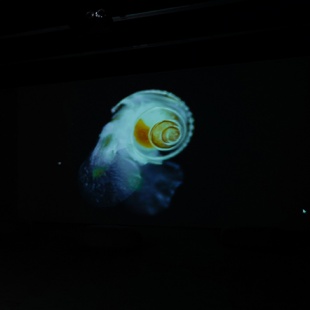 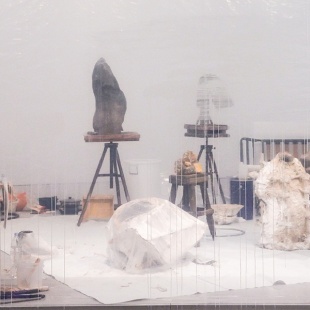 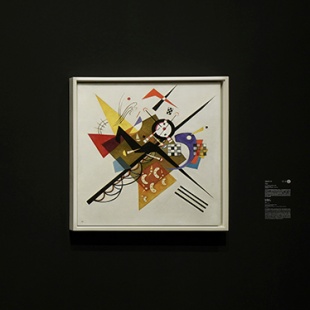 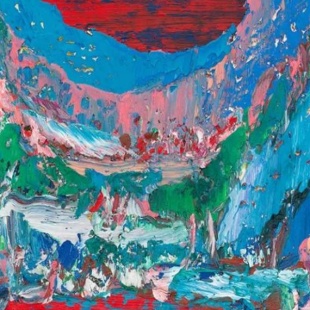